Entry 1
6:40 am
I wake up listening to Chris Brown. Wow, I was really jamming, laugh out loud I was singing, dancing, and jumping around to that song. I bet my mom and my sister was like what is that girl doing in there. Anyway after that little ordeal, I go into the kitchen and get some Captain Crunch cereal; by the way I only eat the berries. After that my mom and my sister are just getting in the car. Now that my sister is finally out of the bathroom doing only God knows what. I…

Well, 7.4GB of digital footage later...I can't figure out how to edit it! I'll not give up yet, but have that feeling of dread each time I aproach the computer to try yet again. I'm longing for the simple days of 8mm film and a splicer in the bathroom! Can anyone offer helpful suggestions? Or come over and edit with me? :-/

Amanda and Jared renewed their vows in Cuyahoga Falls, Ohio USA. They were joined by their two month old son.

As we give great importance to heart attack, across my research i came across TIA which is known as transient ischemic attack, which is referred as the transient episode of neurological dysfunction caused by ischemia (loss of blood flow)-either focal brain, spinal cord or retinal – without acute infarction (tissue death). It is said that TIAs and strokes cause the same symptoms, such as contralateral paralysis (opposite side of body from affected brain…

I just got out of my Tech Lit. class a little while ago, and I’m in my Faith Foundations class. I am not fully awake yet but I am excited because we get to go to our clubs next. It’s not super noisy in class right now, people are talking but it’s pretty calm. I enjoy looking at some of the other girls saint picture drawing of their deceased loved ones.

Clubs were pretty fun today. I had my R U Prepared…

Plans do change, as you will see, the video now complete provides a message ...that everyone can do something or wish something they can do to affect our contributions to co2 emissions to our planet. I believe that global warming and the social and economic effects of using fossil fuel energy to be the most serious problem facing the global community. It is clear that simple proven technology is here and now available if only more of us were aware of it and how much it can improve anyone's… Continue

Comunity Organizing on Right to Housing in Kenya 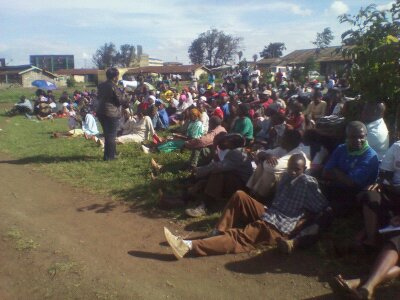 9:30 am: English class was very busy while my desk neighbor whispered lines Romeo whispered to Juliet in “Romeo and Juliet.” We had a vocabulary test with many difficult words, then we read the death scene for the classical novel Romeo and Juliet by William Shakespeare. The book is full of humor and tragedy, and has very sensual details.

10:09 am: In gym, we played a game with a basketball named “knock out.” It is a crazy game in which we try to out shoot each other. Towards the end,…

One Day on Earth: 11.11.2011 on Veterans' Day We Also Remember Lombard Victims of Crimes

I am an ETAC Ambassador at Beaconhouse School System, I am also an English teacher and a fashion designer. I enjoy videoing my students ICT activities. I tend to enjoy more when I get them onto video taping directing, producing and finally editing the video for learning purpose.

It’s normal that I always wake up shaking. That’s how my dad got me up every morning; it’s one of the few ways that would actually get me out of bed. But, I had my of revolting against getting up by taking the longest time possible to drag myself out of bed and to the bathroom. While in there, I reviewed what my day would look like: One test, one quiz, some lectures, and my little sister’s birthday party. It wasn’t actually her birthday; we were just…

What a Colour Is

A great mathematician, physicist and of the foremost scientific intellects of all time, Sir Isaac Newton has quoted,“If I have done the public any service, it is due to my patient thought.” In 1665, through his keen observation and keen thought that would change the world forever. He discovered something which would defy public opinion of what was light and the belief that white light was the purest form of light…

Mysteries of the Heart

William Harvey once stated that "I profess to learn and teach anatomy not from books but from dissections, not from the tenets for philosophers, but from the fabric of nature." When it came to discovering how things worked, William Harvey cut right to the heart of the matter. How blood circulates is a mystery that was solved by an English physician William Harvey, in the seventeenth century. The question that plagued him was, what…

POLY ROCK'RZ take up the challenge

Our group the POLY ROCK'RZ took up the challenge on the 11th day of the 11th month of the 11th year of the new millennium. It was an overcast day that did not make for great lighting for filming but the activity went ahead.

We had 11 young volunteers take up the challenge to be part of Niue's first contribution to this One Day on Earth initiative. The concept was based on getting 11 young people to complete 11 fun activities on the day and show off some of the islands natural…

This performance is a reflection, a very personal response to Veterans Day. I drove to a nearby National Park - Golden Gate National Recreation Area, just North of San Francisco, CA. I hiked a short distance up a bluff to a historic structure, once an active part of Fort Cronkhite called Battery Townsley. In 1940 two 16 - inch caliber guns, each capable of shooting a 2,100 pound, armor-piercing projectile 25 miles out to sea…

In honor of Veteran's Day

I submitted two photos taken on 11.11.11, both of a Vietnam Veteran named Jack. He sat in his wheelchair on the Pearl Street Mall in Boulder, Colorado, USA, holding a sign that described his experience and needs. I noticed how kind he looked and stopped to say hello and give him some help. In exchange for a portrait, he asked only for an iced tea. Jack told me he had been stationed all over Vietnam, including "The Hilton" - the notorious prison where many American soldiers were… Entry 1 on 11/11/11 7:20: When I woke up in the morning I put on my uniform. I had no breakfast this morning. I went to school early so that I could finish something for a teacher.

Entry 2 on 11/11/11 8:30: In Tech Lit class we got excited because today is the special day for the A Day In the Life project. We worked on making things to 3D print. I made an account on TinkerCad. This website is what enables you to create things to print.

My day began at the Bartleson Ranch in Arroyo Grande. My brother manages this ranch where they grow lemons and avocados; I shot the photo of a hawk riding updrafts over the avocado trees there.

My number one reason for being on California's central coast, though, was to support my brother at the launch of a business has nurtured to fruition for a decade; Casta Negra…

Hello!
My name is Marta. I leave in Belarus, it's in the middle of Europe. I study at Lyceum №1 at the philological department. My english teacher told me about this project and I was really interested in it. My classmate Vika and I decided to make a project and publish it in the Internet.
So, that our "One day in my life" project http://lyceum1minsk.wordpress.com/
I am keen on photography. I have already had a…