A Healthy Dose of Doubt

Circumcision is becoming a hot topic for today’s expecting parents. Word is out that not only has circumcision been considered medically unnecessary since the 70’s , (even though it hasn’t been common knowledge) but also that it’s damaging! Delving into this country’s circumcision past is a disturbing enough journey; but what’s most surprising is that the cruelty and racism that seem to surround the promotion of this controversial surgery aren’t only buried in the past, but are still alive… Continue

Man, even with the weaknesses he possesses

now, can be great if he takes to task

the well being of his fellow man. If he can

hold high virtue as his goal and peace and

harmony among men as his prime directive

instead of self indulgence, personal gain, and

the exercise of his petty antipathies, he would

be happier than he has ever been...or ever

On this day full of symbolism, I will live two meaningful events: my father's 70s birthday, and a flight from Paris, France, to Lisbon, Portugal. Expecting to see how things run.... :-)

Anyone else apart of an online school or lives in Canada?

Anyone else apart of an online school or lives in Canada?

The darkness with short days and cold nights has settled in. The knights of night are now returning to their overwintering sites here in the northern Europe - we are talking about bats. Due to the cold winter with snow and temperatures plummeting far below zero degrees Celsius, the bats in Sweden are either forces to fly south like the migrating birds, or hibernate in caves, cellars or large trees. An unexpected collaboration started a few years ago between WWF Sweden and the swedish military… Continue

The Saint Lucia National Trust in collaboration with the Forestry Department and numerous other partners will plant over 100 trees on 11.11.11, especially in areas that were ravaged by Hurricane Tomas. In light of the UN's observance of International Year of Forests, we hope that this initiative will help people to develop a greater appreciation for our forests and their many benefits. ﻿﻿We are excited about 11.11.11 and hope that everyone has a great day filming something that means alot to… Continue

One Day. One Nation. One Planet. One Advocacy. One Dream. 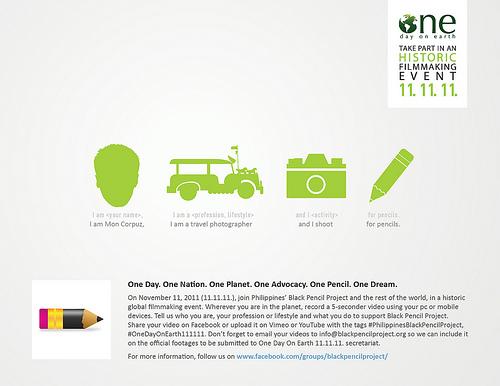 Wherever you are in the planet, record a 5-seconder video using your PC or mobile devices. Tell us who you are, your profession or lifestyle and what you do to support Black Pencil Project.

I do not yet know if I'll be able to attend this event, I have a previous engagement that night. However it seems like a great opportunity to capture extensive camaraderie on film. Unfortunately all I have is my flip cam. Next year I'll be more prepared and have my Pentax 35mm.

The Village of Lombard, Police and Fire Department have not compensated the Family of Mr. Roberto Hung, his Daughter, Lombard Resident Homeowner as Victims of Crimes, Structural Disaster Roofing Water Damages and Losses at 502 South Westmore-Meyers Road and Washington Boulevard, one block southeast from St. Pius X Catholic Church, and one block southwest from Westmore…

I have never blogged before, but here goes something...

I was trying to decide what to focus on nov 11 and after watching the trailer decided that I don't have to have an agenda; I merely need to document:  Wherever and whatever I can, that day is to be documented for all the interesting and mundane; the obvious and the latent; the livliness and survival; new and ancient and everytime in between; for all who are aware of the butterfly effect we live and those ignorant of lives and…

New to the community

So happy to part of this community! I'm also very interested in observing what kind of content people share with the network, what ultimately ends up being published in the library, and just how people interact in general. I pledge to be an active member of this community of practice, considering this project incorporates ALL my interest! - no more lurking for me.


Serve The City Dublin - Better Together from omar o'sullivan on Vimeo.

They come in peace

They Come In Peace from doc tv on Vimeo.

these are the days of our lives... 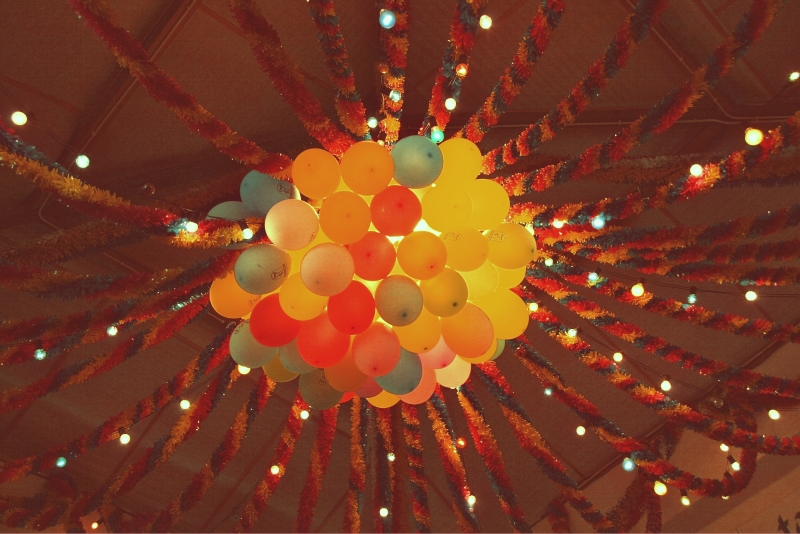 To some people, November 11th, 2011 is yet another regular day that may pass as much as the next one, aside from the funny coincidence that it carries 6 (ones) in it. Well, I beg to differ; for this day is a major event for the rapidly increasing community of One Day On Earth, as it is considered a day to embrace the humanity in all of its forms and remove the differences that stand as obstacles in the way of uniting the population of the globe, by bringing them to do but a simple thing; to…

Abuse of A Translator and Interpreter by the Village of Lombard, DuPage County, Illinois USA

Abuse of a Translator and Interpreter by the Village of Lombard, DuPage County, Illinois USA

A Medical Examiner's Twenty Years As A Victim of Crime at the Office of Workman's Compensation,…