Well, its finally finished - my second film for 11.11.11 takes a look at Remembrance Day and the 11am service at the Adelaide National War…

My First film for 11.11.11 - Adelaide Screetscape by Night - Timelapse

Remembrance Day here in Australia is often a low key event. However, I thought it is something of significance to be worthy of capturing, and hopefully get a few people's reactions to Remembrance Day too and what it means to them.

I have some new camera gear this year as well - good in that the picture quality is better, bad in… Continue

Project Horus: The story behind the flight of Horus 8

Well here is the story behind why we failed to launch a balloon on 10.10.10. This is the story of 10.9.10 and what went wrong - Murphy's Law was well and truely with us that weekend.

The first of the films from what was supposed to only be the test flight of the helium balloon HD camera experiment is now up on Vimeo. This is a short compilation of the images captured from the camera attached to the balloon itself. You can see it here:

My One Day on Earth in Adelaide, South Australia

My final plan for filming on 10.10.10 was to try and capture images of things I felt made my home city of Adelaide unique. The raw footage for this has now been uploaded, and tonight I have finished my own short film version of that content. While I won't be submitting the edited footage formally, I have placed it directly on Vimeo for all to see and have embedded it here for you to enjoy.

Well, we have had an eventful afternoon. Saturday's launch on 10.9.10 which was predicted to be the safe launch did something very unexpected, with the burst of the balloon being delayed due to various factors. This lead to the payload travelling an additional 50-60km furtther than expected. The end result was that the payload landed in the ocean about 100m off shore. While we recovered it, the electronics were damaged, and so that payload will now not be available for 10.10.10.

Well, as a trial run, Horus 8 is being flown today with two telemetry packages and the camera payload. This will give us a good idea of how things will work tomorrow morning.

Here is the current plot predictions showing where the balloon is from it's launch site to now - placing it 22.5km up. We expect to pack up and prepare to retrieve it in about 1.5hrs time! 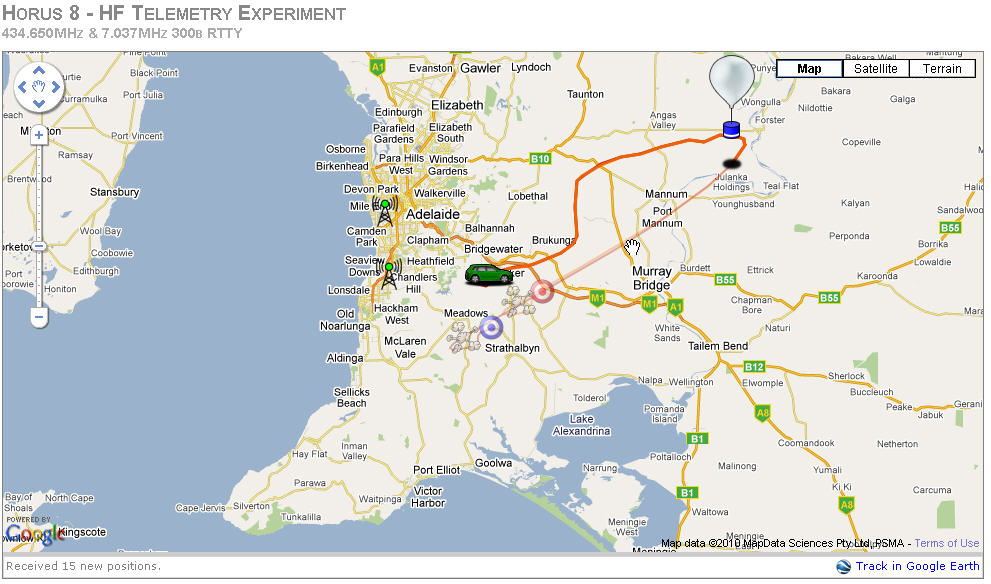 Good news - we have just checked in with the project team and reviewed the predictions for the flight path and we have decided to go for a 2nd launch on Sunday morning!

Helium Balloon Camera Flight for 10.10.10 - In Doubt due to the Weather

Well, the weather is not working in our favour very well for the 10.10.10 proposed launch, with the stable high presure system moving east and shifting the flight path still close to water for a landing. Unlike two days ago however we have become a little more optimistic.

As the Project Horus group wish to definitely fly this weekend, we will be… Continue

Getting Closer - and now the weather is a factor!

Now that we are within 7 days of the launch, we are able to start running predictions of where the balloon might actually fly. This is unfortunately raising some concerns as it is currently predicting that it will land in Lake Alexandrina - which will not permit recovery of the payloads - rendering the attempt pointless.

We can see the predictions here:…

Just a quick update to say that progress is being made on flying a camera payload on the 10.10.10 to the edge of space. Terry and the balloon crew have blogged more about their preparations here. http://projecthorus.org/?page_id=1470

The preparations for the filming is also progressing.

This is shaping up very well!

A sample of the potential flight video images from the Balloon

I have a meeting with the launch organiser for the Balloon flight on Friday night. Looks like the attempt is coming together. Spoke with the second tracking team tonight and am hopeful they will be available too.

I have just completed a montage of the photos from the last flight taken with the still camera which will give you an idea of what we might be able to capture with the video camera. Take a look!

Progress on the Balloon Flight

This is slowly coming together. I have one of the tracking party already commit to chasing the payload on the 10th of October. Terry is thinking about payloads now, and we have one of the local TV stations potentially interested in doing a spot on the flight during the weather segment as well.

A sample of what we saw on landing lasttime can be seen here:…

Well, after casting around and thinking of what to film that would be truely interesting and inspiring, I happened to be invited along the other day to an event that fits all of these criteria.

There is a group here in South Australia experimenting with Amateur Balloon flights, taking payloads to the edge of space. I was invited to participate in their last launch exercise where we chased a balloon 200km across South Australia to recover it and retrieve the photos that had been shot.… Continue